For the materials research portion of this semester, I chose to do a line blend of Kona F-4 Feldspar and Georgia Kaolin, two of my favorite dry materials. I love the slightly crispy feeling of scooping Kona F-4, and the fluffiness and color of Georgia Kaolin.

Kona F-4 (Na2O.Al2O3.6SiO2) is a soda feldspar, used as a flux in many glazes. The soda portion of this feldspar is the dominant flux in this material.  Kona F-4 is a source of Insoluable Sodium and Potassium

Georgia Kaolin ( Al2O3.2SiO2.2H2O) is the source of Silica in this blend, so that this combination will have a glass former and a flux, hopefully resulting in a surface varying from dry to semi-gloss, anticipating a relatively smooth surface.

Each test cup contains a total of 100 grams of material and 1/2 cup of water. There are nine test cups total, with the following proportions: 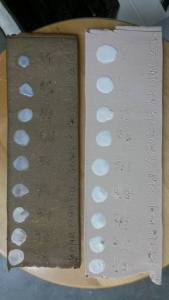 So, I didn’t really lay these out super well, but in any case, the Kona starts 9/1 on top, and Georgia Kaolin is 9/1 on the bottom. The right test tile was fired to Cone 06, the left to Cone 10 in reduction.

At Cone 06, all tests were somewhat fused while a bit powdery, but the Kona heavy tests came completely detached- the 9/1, 8/2, 7/3, and 6/4 dots all were loose upon unloading, crispy, but totally detached from the clay. The Kaolin dots were still well attached, but dusty feeling enough to set my teeth on edge.

At Cone 10, the top two Kona heavy tests were well melted and fused to the clay, but clearly had crawled inward from their initial width- would indicate a tendency to crawl if used over a large surface. The next three tests were fairly melted to each other, but beginning to peel up at the edges. The last four test dots, starting with 4/6, Kaolin heavy, ranged from lightly creamy, but scaling off of the clay, to crusty and popping off the surface, to well fused but downright crusty.  Interestingly, there is a gray/purple tint in 3/7 and 2/8.

This series of books are based upon friendships that have remained with me since college, lodged within my psyche.

The above story depicts one of the two hardest breakups of my college experience. 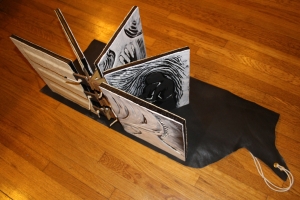 The second story relates a secret compartment of feelings that I never shared.

This final story is based upon how I came to major in Ceramics, and bittersweetness.

These pieces are the most aesthetically articulate and detail oriented that have been achieved thus far in this Grad School experience.  The words of the story are written in small text along the edges of the pages to be a treat to the viewer who chooses to look closely enough.  While the images are the cornerstone and main point, the text is there to add context and deepen the story if there is interest.

Combining mixed media has been an answer to so many difficulties.  Using black and white paint on top of stains and layers of spray paint to accentuate the deeply carved lines and shapes of the images.

Each page is backed with leather, both to protect the image when in storage or being shipped, but also to form a shadow image of the opposite page to bring out the echoes of memory.  The protective outer casing of each book ties around the outside with cotton cord and doubles as a display mat.

I consider my life experience to be the subject for my work, the creation source of the form of my work: “anything that doesn’t kill you”— for example, a period of ignominious suffering/boredom—“makes you stronger,” or helps you to see clearer. – Lawson Oyekan

The simple forms and earthy textures of Lawson Oyekan’s work certainly embody this philosophy.  There is a certain uplifting and soothing spirit and “African-ness” to these forms, echoing ancient textures and patterns on storage urns and water jars, as well as fluid form and sheer “roundness”.

Playing off of this form and texture, I have made several round rattle forms to be Raku fired this semester. (photos to come)

Also, using this round form, but drawing from some of the Olmec research, the idea of animal totems- and the fact that yet again in the midst a stressful time, a small owl showed up on my backyard table, and watched me work in my yard- led to this small pit fired owl.

June 2015 was kind of a hellacious month. A friend and an acquaintance were taken violently from this earth, work was stressful, and it seemed impossible to see beyond it.  I was struggling to see the point, and not much made the point seem worth it.  But I knew July would be full of a Ceramics and Mixed Media class at FHSU, and I was looking forward to that.  I decided that I would use the class and what I learned there to heal from the heartbreak and stress.  So, as a Tribute to June 2015: Cura Te Ipsum (heal yourself).

Anchors. Maps from places I’ve lived, press-molded painted and flocked clay elements in a clay box, flocked and painted steel elements. The nuts and bolts that anchor us to place. 8x8x4. 2015. 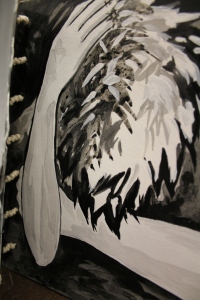 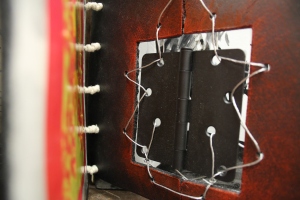 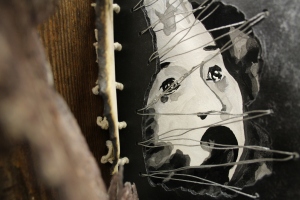 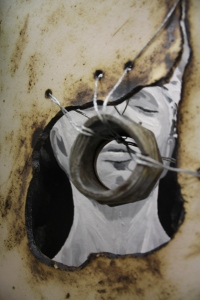 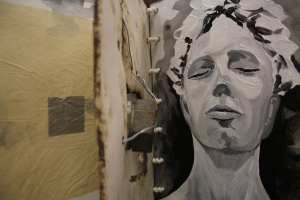 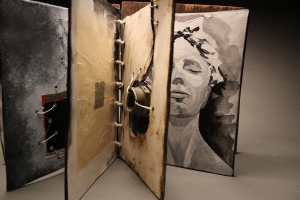 Xu Qun is a professor of ceramics at China Academy of Art, Hangzhou, China.  I am particularly drawn to her very smooth, elegant forms and simple, clean glazing.  In her artist’s statement she names utility and “simplicity and serenity” as paramount ideas within her work, building connections to “the very nature of being human”.

These ideas of getting to the root of things are fascinating to me, especially in that she uses functional ware to do this, where I am telling stories.  I love that leap into function as the unifying factor and use as the goal.  Perhaps this combined effect of simplicity and functional utility, as well as building connections, can become more prominent in my work.  In any case, the smooth purity of the clay and crisp coolness of the Celadon glaze, in conjunction with such graceful forms, give my mind a sense of stillness that I can deeply appreciate.

Yanze Jiang is a ceramic artist based at Nanjing Arts Institute.  She uses porcelain slabs and traditional pottery techniques and glazes to make “abstract or conceptual works”. (Ceramics Today)

The graceful lines of her abstract landscape-esque works, paired with the chill of her celadon glazes, create a visual environment that is both eerie and pure.  Having experimented a bit with celadons this semester, I covet the crispness of her glaze, likely due to her glaze being used on porcelain as opposed to my stoneware (given other mineral content).

Also, after venturing into repetition of form a bit this semester, her piece “Teapots on Parade” is deeply satisfying.  That the curves of each teapot echo each other so precisely, and they stand at attention before the “lead teapot” is a great balance of refinement and humor.

Lastly, this set of inversely matched cups is an inspiration for my future tea sets.  This level of precision and balance is a stretch for me, so this set substantially raises the bar on what I hope to do. 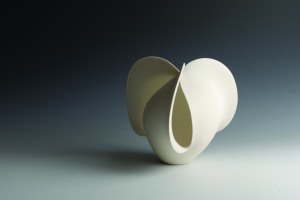 According to Jin Zhenhua’s statement online, her work captures and celebrates the rhythms and beauty of nature.  She specifically uses the word “fleeting” to describe this beauty and rhythm, and this fits her aesthetic well.  From her studio in Jigdezhen, she creates some of the most graceful and fluid work I have ever seen.  I would love to see these pieces in person and follow the lines and curves all the way around.  In the work shown above, the interaction of light and shadow around and between the folds and curves of the clay create such a sense of purity and life, and also that “fleeting” element, a tenderness permeating the strength of the lines and forms.  This is a powerful combination of ideas to me- the powerful and ephemeral sides of the world. 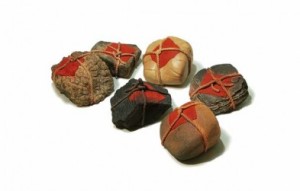 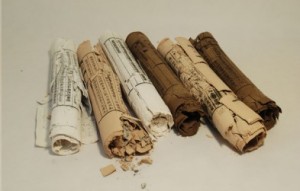 Lu Bin’s work is new to me, but I was immediately drawn in by his references to fossils and historical relics.  Above, Fossil6 from 2001 and Great Dharani13 from 2012, demonstrate the progression of his work from “stone” fossils to crumbling clay documents.

The fossil stones tied up in string are fascinating to me.  Making a special package of something old, marking it, and bringing it current importance and relevance, in a way reversing the fossilization process, is a simple but profound contextual gymnastic.

His work ranges broadly and is quite varied in technique and appearance, but always connects to historical environmental and cultural references.  Lu Bin was born in 1961 and has exhibited widely in Asia and Europe.

Ai Wei Wei is a difficult artist for me, and I am only just beginning to figure out why, because when it comes down to it, I like his work.  And I really, really like the Sunflower Seeds installation.

To start, why this is hard for me: As best I can tell, and I may be wrong, there is a deeply embedded ridge of compliance and obedience in my psyche, which causes me to resist/be flummoxed by drama and confrontation in and of themselves, and confrontational/controversial art as well. (This is in reference to the Dropping the Urn performance piece.) The underbelly of that is that I am also perversely drawn to it, moth to a flame.  It would have horrified me as a kid to damage someone’s plastic Wal-Mart bowl, much less as an artist, to destroy a (replica?) ancient artifact.  There is some disjunct in my mind when art destroys something… But it’s all a cycle of life and death, right?  So to burst the chains of thousands of years of deeply ingrained culture makes sense in a larger view, I suppose, even if it seems somewhat sacrilegious in the moment. That is a hard idea for me to hold, but I’ll go with it, and learn to understand Ai Wei Wei’s work from the basis of loving Sunflower Seeds.

This installation consists of 100 million handmade, handpainted, and fired porcelain sunflower seeds. Many artisans at Jingdezhen created these seeds for Ai Wei Wei, and the installation filled a hall of the Tate Modern in London.  My interest in repetition, interaction, and just the sheer quantity of work, draws me to this piece.  This sea of individuals is also a little overwhelming in that we are all in a sea of individuals, and while we may be really important in our own little space, where do we fit in among, say, 100 million others? 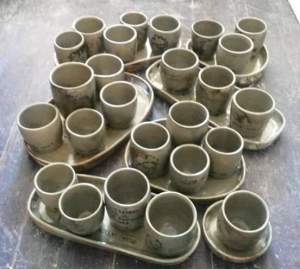 For Series 2, I based a series of cups upon moments in life that contain a mix of emotions. These particular moments were drawn from experiences drawing upon Trust, Love, Disillusionment, Joy, and Ambivalence.  The cups are meant to be gathered into themed chapters in the tea trays, and can be interpreted by the viewer as to which chapter they belong in.  Chapters are titled “Just Once”, “Are your current successes worth the price I paid?”, “Only an unsettling rhythm can explain this.”, “You froze me.”, “Public… Private…”, “There are no words for this.”, and “I would marry you”.  Each of these chapters can be a positive or a negative, or ambivalent, depending upon which cups are placed in the trays, changing and inverting the stories into an open book for my stories to become the viewers’ stories.  These cups are glazed with Light Green Celadon and Iron Oxide stain, and images and text are carved and stamped into the cup body.  The trays are glazed with a layer of Iron Oxide stain, then Winokur Yellow overlaid with Light Green Celadon, and stamped with text.