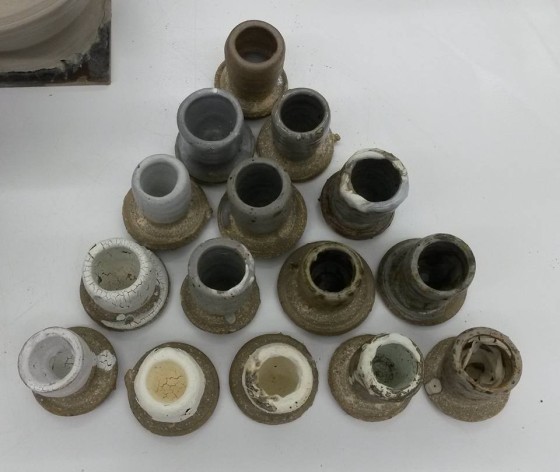 Upon first blush, these materials interacted surprisingly well with my current clay body. Obviously, some in their solo state will not be so great, but it didn’t take much of an additional ingredient to make them adhere.

Most notably, EPK solo was almost adhered, but with 25% whiting did not adhere at all. 50/50 EPK and Whiting, the middle bottom, adhered somewhat, and was a delightful crispy, hard surface. Whiting by itself peeled off, but with 25% EPK formed a slightly crusty surface, alluding to a fake ash, but a step or two too dry.

Along the left side, EPK with 25% Custer crazed heavily and did adhered only marginally better than the EPK with 25% Whiting, but was a more interesting surface, with smaller crazing patterns than the Whiting combo. Middle left, 50/50 EPK and Custer, is a quite dry matte with very small crazing patterns and hard and satisfying feel. Custer solo is a very glassy and white surface where it pooled and added a gentle sheen to the bare clay, but crackled when thick in the inside. 75% Custer and 25% EPK is a buttery, hard grayish white that may warrant further exploration.

Along the right side, 75% Whiting with 25% Custer also echoes a fake ash, but appears to want to crystallize and begin to bubble where it thickens. Its base is grayish and thickens through gold to a glossy brown at its thickest. 50/50 Whiting and Custer a slightly more matte version of 75/25. As noted above, 100% Custer is very glassy. 75% Custer with 25% Whiting is a glassy grayish that brings out the iron speckles in the clay really nicely. A good fit for this clay body, and allows the color and texture to come through.

In the interior triangle, top, 50% Custer/25%EPK/25% Whiting, is probably the most exciting result for me. It has an eggshell matte finish, brings out the iron of the clay, and is smooth to the touch.

Left bottom of the interior triangle, 50%EPK/25%Custer/25%Whiting, is the second most exciting. It is a tad crusty to the touch, but brings out the iron in the clay AND gets an orange halo at the thin edges.

Right bottom has potential as well, but doesn’t grab me quite as much as the others. It is a 50% Whiting/25% Custer/25% EPK combo, and is the closest of these to a fake ash. Its base is a grayish white that goes through yellow to greenish where it is thickest. It does not appear to run excessively, which is a plus.

Overall, this combination of materials has great potential, and the inner triangle may warrant further, more incremental exploration, as well as colorant testing.