For the second series of work this semester, I chose to return to coil building and figurative forms for a moment, regrouping, in a way, from a very difficult initial portion of the semester.

These four pieces, based upon profoundly transformative travel experiences that I knew were shaping who I am as they were happening, were meant to unite varying degrees of abstraction with carved imagery in the graphic-novel-esque style I have been working with for some time.

Just as the stories associated with these pieces transformed me, these pieces began the transformation of this semester from being a wrestling match into a huge open door. Success!

They are made of stoneware clay and finished with Rusty Matte Blue, Green, Yellow, and Brown glaze, and Iron Oxide. Bases are oiled Walnut.

Canoeing in Alaska- I think I was twelve years old, maybe 11, and I remember all of us paddling through the fjords south of Juneau, and realizing how powerfully strong I felt, but also how tiny we were, above such very deep water, and knowing there were likely much larger creatures somewhere below us. I based the images on this piece off of Inuit bone carvings. 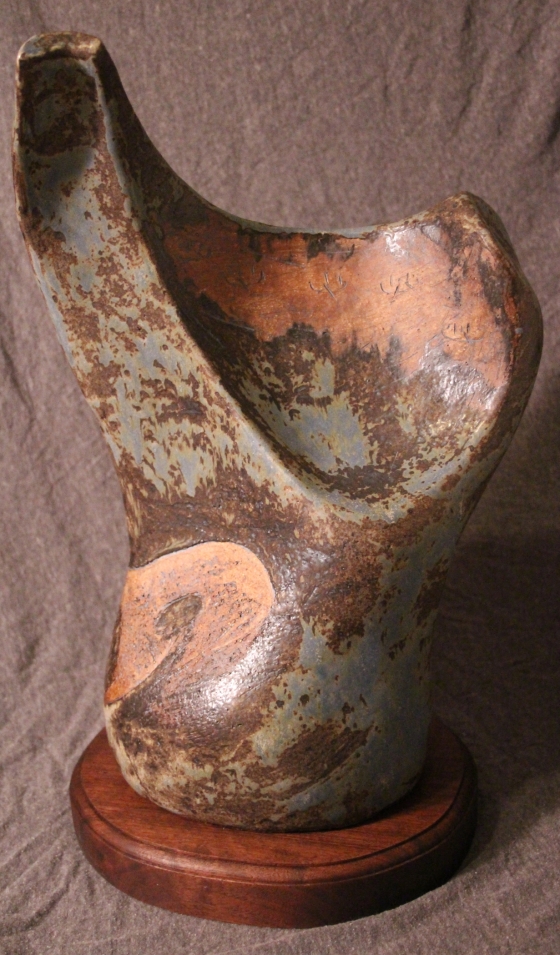 Subway Navigation in Paris- While I was a Senior in college, I was part of a study abroad program where we traveled to French cultures on this continent, as well spending six weeks in France.  There were substantially more women on this trip than there were men, and because I was able to read maps, I was selected to lead my group around Paris.  This meant making sure were all stayed together and didn’t get lost, but also were able to make it to and from various assigned locations on a schedule. This was my first true experience with leadership, was reasonably successful as I recall, and I came back home with a level of confidence and self-trust that I had not experienced to that point in my life.

Engagement in Sweden- There once was a wonderful young man who I traveled to Sweden with, to visit his childhood stomping grounds. We waded in the sea and caught small fish in our hands, drove through misty woods listening to music that gave us shivers, and saw windmills on rock outcroppings off the shore.  While we were there, we exchanged rings on top of a stone mountain, and began to plan a future.  While this didn’t work out in the end, we had a wonderful time, and it was the beginning of a series of events where I learned the value of deep honesty.

Sitting on a Sunny Rock After Driving Two Full Days Alone in Yosemite- My best friend from college passed away a few years ago. Several of us from college met to say goodbye to her and build new memories in her favorite places in Yosemite National Park. I drove close to 18 hours the first day, then about 9 the next, and at one point looked up at my rear-view mirror and saw that the road was stretching straight as far as I could see in front of me, and as far as I could see behind me, as well. I have never felt so full and so alone at the same time, and I was screaming at Kate “OH MY GOD HAVE YOU EVER SEEN SUCH AMAZING THINGS!!!” and felt her there laughing with me. I arrived exhausted and cleared, and the next morning, chilly and dewy, sat on a sunny rock in my favorite hoodie, and felt things settle into peace.