With the arrival of the potter’s wheel in Greece, in basic form, around 2000 BC, possibly from Egypt, where it had been in development since possibly as far back as 4000 BC, aesthetics advanced substantially.  Not only did forms become much more symmetrical and more easily mass-produced, the decoration changed as well.  From simple narrative and symbolic images like this piece from Crete, c. 1500 BC:

Came these more geometrically informed pieces, clearly lined on a wheel of sufficient advancement to turn smoothly enough to allow for even lines to be brushed on the full circumference of the piece: 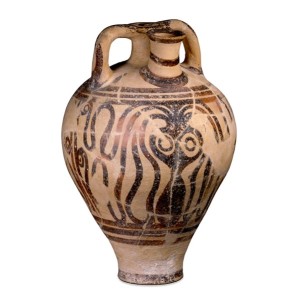 At around this time, the Greek mainland economy gained traction with trading pottery and other products, cross-pollinating with surrounding cultures, particularly the seafaring Cypriots, who adopted some of the Minoan aesthetic themes.

Pottery from this time on advanced in skill and refinement, still using images to relate cultural life and portray important elements of daily activities.  These pieces of later work on mainland Greece, approximately 530BC and 500-300BC respectively, appeal to my story-telling and illustration aesthetics.  The crisp forms, too, while tying back to historical forms, give the work a clean and pure visual punch. 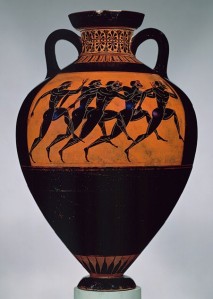 Honestly, these images also remind me of our first video games on our Tandy 1000 computer.  There was a little guy that you ran around through mazes, solving puzzles, and there was one stage that was all Greek mythology, and you gleaned clues from the paintings to get through the mazes faster and win. My sister and I would hover over each other when we played and it was all super intense.  For part of it, if I recall correctly, you had to find clues while racing spiders, which caused near panic a few times.  Some serious nostalgia right there.