Roman Khalilov lives and works in the Ukraine.

According to http://viola.bz/surrealistic-ceramic-by-roman-khalilov/, Roman is talented and handsome (which, while true, I think is a hilarious way to introduce someone).  He uses a lot of his native Ukrainian symbolism, and then adds a surrealistic turn to it.  He draws on his imagination to interpret this symbolism and I love the dreamlike quality of the imagery.  The intricacy of his designs and careful glazing is really exciting to me, and I hope to integrate something of the detail and color into my work.

Khalilov has exhibited in his homeland, as well as Germany, Italy, Greece, and Russia.  He currently works in the Art Pottery KERAMUS studio in Ukraine.  He also works in 3D sculptural forms, which retain the symbolic and dreamlike qualities of his tile work.  Many are hollow with cutouts and internal structures and additions, which is fascinating to me relative to my goal of joining the narrative tile series into the figurative work I had been doing prior to starting this program.

Some of his work is also fairly monochromatic, and I love the staining effect.  It plays to my years-long interest in using shapes and texture to portray emotions and change the “feeling” of a piece. 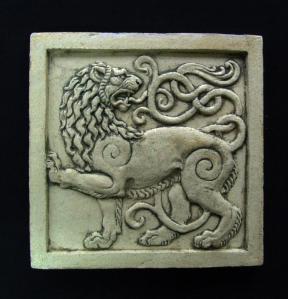